I landed in Peru courtesy once again of Air Europa, it was pretty dismal, and was marred with lack of sleep and seemingly being seated in the middle of a 35,000 foot high crèche.

Nevertheless, I grabbed a cab to my hotel and opted for a licensed one. This was to prove a smart move, as after 20 minutes of driving we were in a very dodgy neighbourhood, with thieves and vagabonds a plenty. Despite this, I couldn’t help but smile when I saw a very drunk Peruvian running laps around a bush. It was a strange start to South America, but being so tired I wasn’t too fussed.

I arrived at Hotel Bayview to find the receptionist asleep and the front door locked (this is normal for hotels here – the locked bit anyway). After a quick window knock I was informed check in wasn’t until 1pm, which I knew, but it was worth a shot.

I headed into Miraflores, the suburb I was staying in, and could see the ocean from atop the hillside. I then went to a spanking new shopping centre, Larcomar, and bought Peruvian SIM cards. We also found a nice Incan market where I purchased a hat and jumper, both items for 60 soles, or about £13.

The afternoon brought a welcome sleep in my comfy new hotel room, and after planning to sleep for just a couple of hours, I woke to a pitch black Lima, and after a little panic realised that it wasn’t 1am, but 7pm. I hadn’t updated the time on my phone, and Lima is totally dark from 7pm onwards.

Panic over, I headed downstairs for a welcome gift, a traditional Peruvian drink, Pisco sours. It is a pretty strong taste and certainly warms you up. If you want to try one, here’s the recipe: 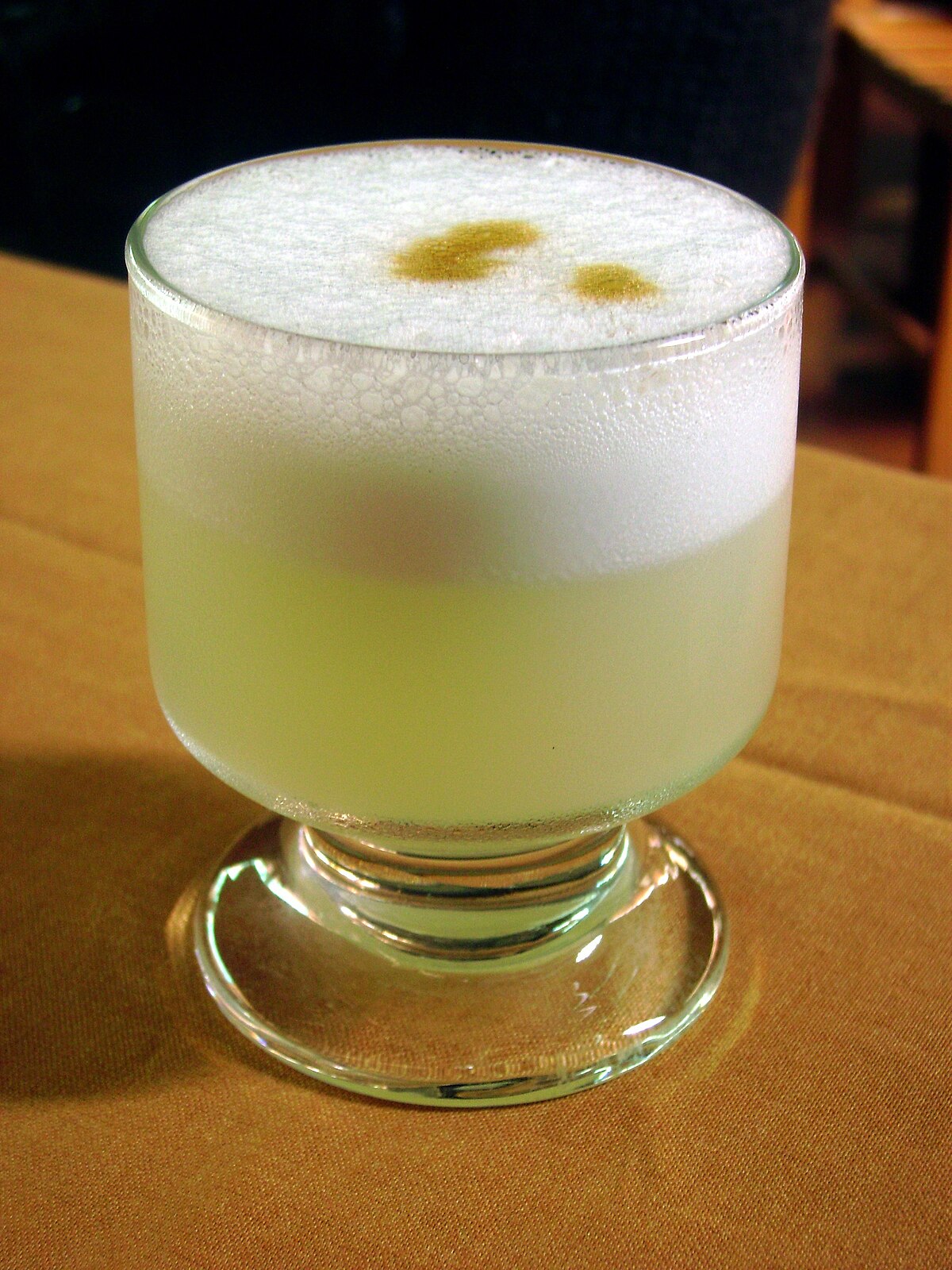 I wandered into Miraflores to find it very much alive and kicking. Everything from launderettes to banks were open, and bars, of course. There is a walking only street called Pisa Street which is known to be the best for drinks and atmosphere in Miraflores. I was accosted every 5 steps, which I don’t mind when they have something to offer, but they all just say ‘pizza, pollo, happy hour’ and that frustrates me because when somebody talks to me I feel it rude to ignore them.

67 ‘no, gracias’ later, I found an empty place with nobody street grabbing. Naturally, I entered and bought a couple of overpriced drinks, especially my 2 pint bottle of beer. An added bonus of this place was that the Peruvian version of the Masters was on (an English over 35s football league for retired players). It was only when a member of staff rushed out to say hello did I realise that they do have a street grabber, he was just in the loo. Never mind.

I finished my bevvies and headed out to explore some more of Lima’s bustle. I found myself looking at a fish and chip shop, Peru style. I had scampi and chips costing round £2. I loved it, even if it was a little oily. It was all fresh and made to order, can you imagine the price in our capital, London? I was impressed.

The next day started slowly, with a well deserved lie in and fresh fruit breakfast. I was off to the center of Lima and as such filled the day bag with food, drink and the camera. Lima seems to be eternally cloudy, but rarely cold.

My taxi to the center took a while as drivers are crazy here, and it is dog eat dog on the road. Fortunately, the changing of the guard had only just started, the main reason I came to the very center. It seemed to be a much grander affair than we have in the UK, and I enjoyed the show. The city center has plenty of beauty, only slightly let down by the poor air quality, mainly from car fumes.

Not one to stay on the beaten path, I went for a walk slightly north of the center and before long I found myself slightly off the map (read: lost). This was good fun though, I even grabbed an apple strudel off a street vendor for around 15 pence.

I found my way back to the center eventually, and stopped at a small cafe for a bite to eat. I had ceviche, the national dish. Basically its small pieces of raw fish, with raw onions, sweet potato and lots of vinegar. LOTS of vinegar. It was lovely, but having said that I am the worst food critic going, I love most things edible.

Speaking of food, I went hunting for clothes that night back in Miraflores, and as usual found an eaterie instead. It was a doorway with stairs leading to the next floor and a tiny sign that I noticed by accident “Vegetarian Restaurant”. I tried a fake meat saltado, which was nice even though the fake meat wasn’t very meat-like. I did find some shops though, and I bought a jacket because it was cheap and I wasn’t sure what the temperature would be like in Machu Picchu, a few days from now.

The next few days I took in Parque Del Amor, more food (at La Fondue and Almazen amongst others), some bars including Corner Sports Bar, Playa Waikiki, Redondo and Carillo, along the beautiful magic water fountain. I had our only negative experience of Lima at Parque Del Amor, basically a man approached me and tried to sell me a bracelet. When I said no, he told me to go away, in much worse language. I laughed and said okay, and left. Laughing is not recommended, I think it made him angrier! I would definitely still recommend seeing Parque Del Amor.

After the meal at Almazen I was running late for my flight Lima to Cusco. Food is my Achilles heel. I flagged 5 taxis, all of whom couldn’t take me there because security at the airport only lets licensed cabs through. Eventually I cut my losses and got a cab back to the hotel and ordered one from there. It arrived after 10 minutes and I jumped in, panicky.

I managed to get my message across in broken Spanish that I was flying in 45 minutes and the driver had informed me that the cab would be 60 soles, a huge price for Peru. I said ‘sisento es bien si usted rapido’ which was my effort at saying 60 is fine if you’re quick. Fair play to him, he drove like the wind, we got beeped and flashed 3 times more than usual and somehow made my flight. I gave him 70, lifesaver.

Maybe it was because I had not long had a 12 hour flight, but the 90 minute flight to Cusco flew by, pardon the pun. I was met by Cusco Transport owner, Lino, outside the airport and gratefully accepted his offer of coca tea. The altitude made it hard to breathe. Next is a 90 minute taxi from Cusco to Ollantaytambo, where I would be for 2 nights. The views were incredible on this journey.

I arrived at my hotel, El Albergue, in time for a nice meal, even if it was a bit pricey. The hotel tries to be eco-friendly, which is great, but I used so much water trying not to be burnt or frozen that I think the solar powered shower is a bad idea. Machu Picchu tomorrow, sleep needed!

One thought on “Lima”