Another stupidly early morning, another taxi, another plane. The descent in to San Jose airport was beautiful and I landed safely among the lush rainforest. 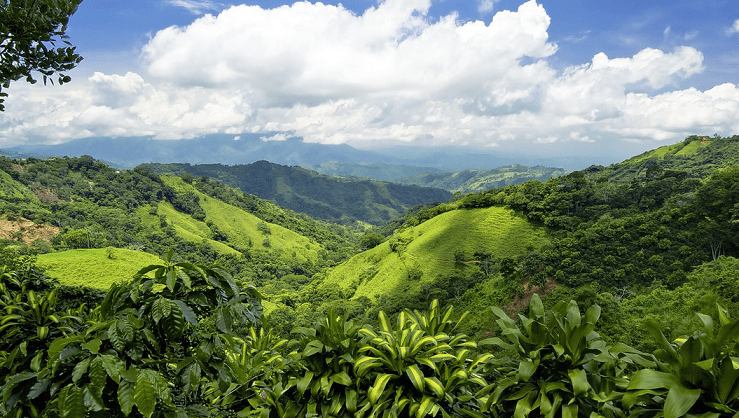 There was a man waiting for me outside the airport, he had a sign with my name on it, nice touch. He rang another chap who was to come and collect me. That was his only job, hold a sign then make a 5 second phone call. As we got into the minivan that came to collect me, he said ‘tip for me?’ I thought you cheeky bugger you’ve not earned one! I gave him some Colombian leftover coins and told him to be happy. He didn’t look impressed, but I wasn’t fussed.

I signed my life away to POAS Rent-A-Car and jumped straight into my 4×4 vehicle, a Daihatsu Terios. I opted for the full insurance, as I’d heard dodgy things about Costa Rica’s roads. My journey for the next 3 days was pretty mental, see the Google map of it here.

The first part of my journey was a steady couple of hours down towards Manuel Antonio on the South West coast. I had wanted to see the national park and go to a special place nearby for lunch.

I tapped the name of the restaurant into the satnav and headed down the motorway, with only a few ‘you’re on the wrong side of the road!’ shouts from passersby. The right side of the road just doesn’t feel right to me! I soon got used to it, but having the gear stick on my right was still an issue, the first 100 kilometres was full of me banging my left hand against my door when I went to change gear, an automatic response when you’ve been driving in the UK all your life!

The scenery is amazing everywhere in Costa Rica, and I was loving it. I made a pit stop at the side of the road for cold drinks (it was roasting!) and eventually found my way to the restaurant, called El Avion. To this day, it’s the best idea for a restaurant I’ve ever seen. The owner had an old aeroplane shipped to a spot high up near the coast, meaning you can eat your meal with the best views in Manuel Antonio. 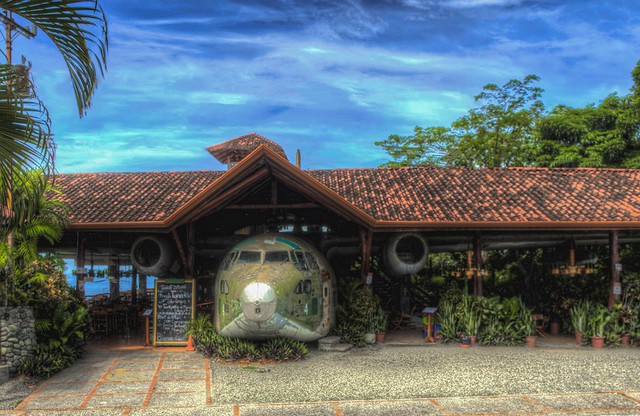 I filled up on gorgeous fresh food then headed 10 minutes down to the coast to the beach and national park. I parked up for the agreeable price of 3,000 colones. This includes ‘protection’ of your vehicle. Basically, pay it or have your window smashed. Excellent!

The national park is around 15USD to enter. It’s a nice walk, and I chose to go alone over taking an expensive guide. I saw sloths, lots of birds, and an iguana. Due to time constraints (massive journey ahead) we couldn’t complete the trail, but I was almost dying of dehydration anyway so we did half the trail and turned back. We spent half an hour checking the busy black sand beach out, then jumped back into the car to begin the next leg of our journey.

I was headed to Jaco, apparently a nice, quiet surfers paradise. It was a few hours driving, and I had noticed that the roads weren’t half as bad as people had said. After seeing Bolivia and Peru, a two lane tarmacked motorway was 5 star.

I got to my hotel for the night, the ‘Perico Azul’. The hosts were very welcoming and there is free parking. Just what you need after long drives!

The small but clean pool is in the middle of the 8 or so rooms at this place, with the communal areas at the far end. Breakfast isn’t included, but the kitchen facilities are second to none to cook your own. I chucked the bags down and went for a walk to check Jaco out.

When I got back, I was hot, sweaty and needed to relax. I decided to go for a dip in the pool. It was lovely and cold when I got in, just what I needed! I heard loud squawking coming from the trees nearby, and as I looked up, a group of extravagantly coloured parakeets gave me a free 10 minute flying show! ‘Perico Azul’ literally means ‘blue parakeet’.

There was a nice Israeli guy staying opposite me, he couldn’t go home because of the war so had had to stay longer at Jaco. It’s not a bad place to be stuck though.