What to do on a day in Queenstown? It is the adventure capital of the world, but when you’re on a budget that means nothing! My parents and I opted for the luge. The luge is a go kart type contraption that is powered by gravity. The long race track is fun with humps and corners galore, and a great view over Queenstown to boot. The first time you race down the track you are given a quick intro (brake by pulling the handlebars, don’t kill yourself etc) and you have to race on the slow track, recommended for kids and families. 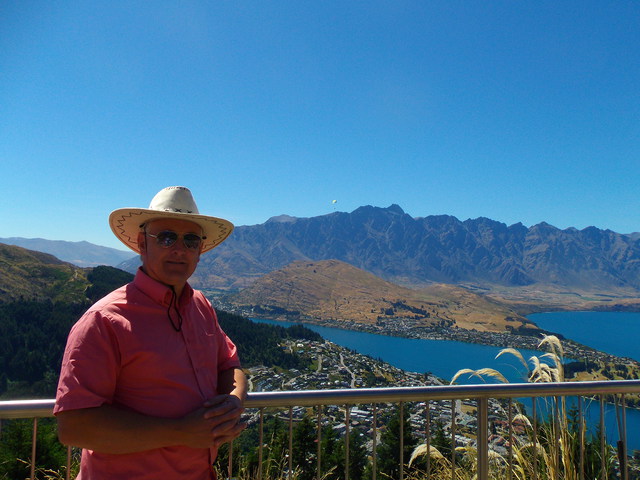 The first cable car system takes you to a cafe and shopping area high up on the mountainside. As you enter the first cable car, there is yet another money making scheme being concocted as a photographer takes a snap of you before the cable car doors close. We asked her to use our camera, but of course she isn’t allowed, so Dad took one of us before jumping in himself.

You are then directed to pick a fitting helmet and ride on a ski-lift type machine that takes you to the start of the racetrack. Mum had stayed at the bottom because of her bad shoulder, so it was just us for the first run. We queued up with our helmets on, which looked very unnecessary for a child friendly go karting jaunt. We hopped into the low down luges and after our brisk safety briefing we headed off down the track. It wasn’t long before I realised why the helmets were needed. 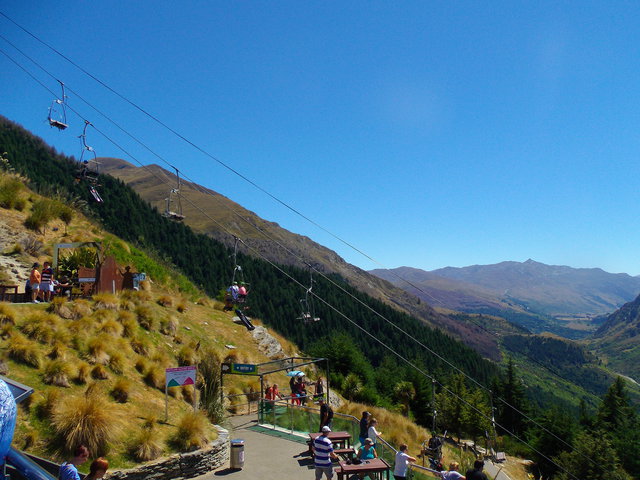 Dad managed to get on 2 wheels on the very first corner, and I genuinely thought he was a goner. He pulled off the landing with a “Woohoo!” and carried on hurtling along. These things are absolutely rapid when they get going and getting braking right is essential. If you brake too hard, the acceleration out of the corner will be pitiful, if you brake too soft you will crash. Dad seemed to pick it up straight away and had finished the course well before I did. For the next lap we chose the fast circuit, thinking it would be crazy after the pace of the first one. To our surprise, the dips were steeper and you could get slightly more pace, but the corners were equally angled so you had to decelerate to the same speeds anyway. The route felt shorter and there were less people on it. I enjoyed beating Dad though, even if I did shoot off before he was ready! We went once more on that circuit, with Dad beating me. We then decided our final 2 laps would be on the longer and more fun first track. It is littered with people, families, kids and even some poor buggers who get stuck after crashing, so avoiding them is one of the best parts of the fun. I won after some good steering, mainly to keep Dad from overtaking me. Not very sporting, but it got me to 2-2.

Our final lap approached and we had all to play for. We set off at exactly the same time and both of us wanted only one thing; bragging rights. Dad went ahead, and I knew that these rides are over in 2 minutes or less so I needed to get past him sharpish. I went on the inside on one of the corners after building some good speed, and to my delight I whizzed past him. We saw 3 or 4 stopped luges in the distance, obviously deriving from a small crash that had rendered one luge immobile. Nobody was dead or dying, so we didn’t slow down. Winning was the order of the day. We slalomed through the young family leaving a cloud of dust in our wake, and we were on to the final part of the track. The track bends  a sharp left, but this can be nullified by going over the edge of the track and catching some air. As we approached there were 2 little girls going about 2mph, and one was going sideways! I had to brake because she was covering the part where you can just fly over, and I squeezed between them, but as I did Dad managed to swerve around the mini roadblock and flew over the track edge, laughing and whooping as he went. Just a few dozen yards ahead is the end of the race, and being in first place plus having the acceleration behind him meant Dad was always going to win. I was sad, but what a rush! It was great fun. I would recommend it to everybody of all ages. 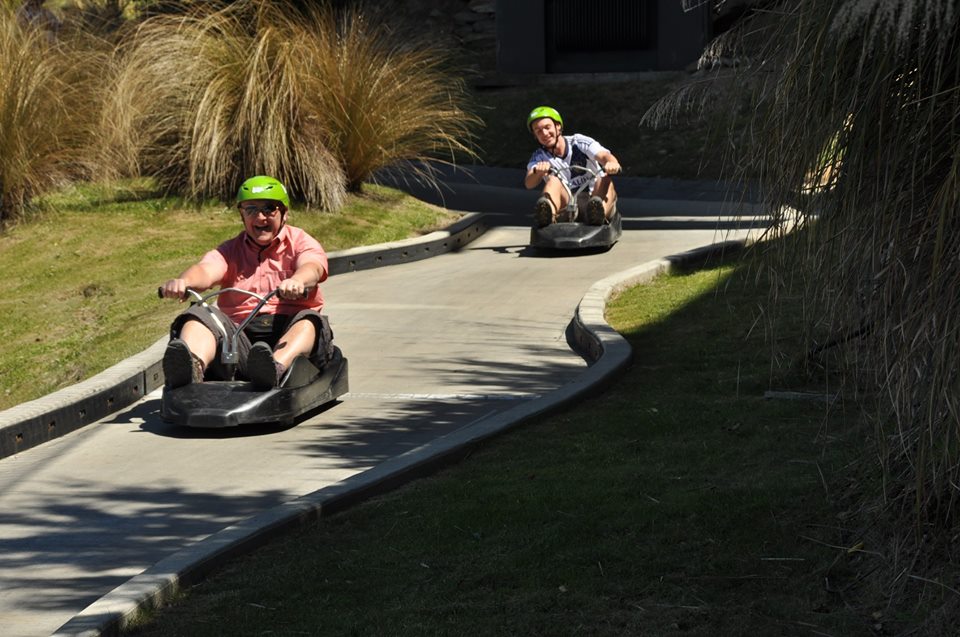 We took a walk into the town for lunch, and found a nice restaurant by the shore of the lake. I can’t remember the name of it but the food was good, and they catered for vegans. Plus we shared a fishbowl which packed a nice alcohol punch! As we ate we watched the speedboats racing about full of tourists, an underwater jet ski called “sharkzilla” that looks quite fun and a large coal powered boat chugging along puffing out huge clouds of waste. I think it is supposed to be a nice throwback to older times (if there is such a thing in New Zealand!), but I just saw it as a waste of coal. 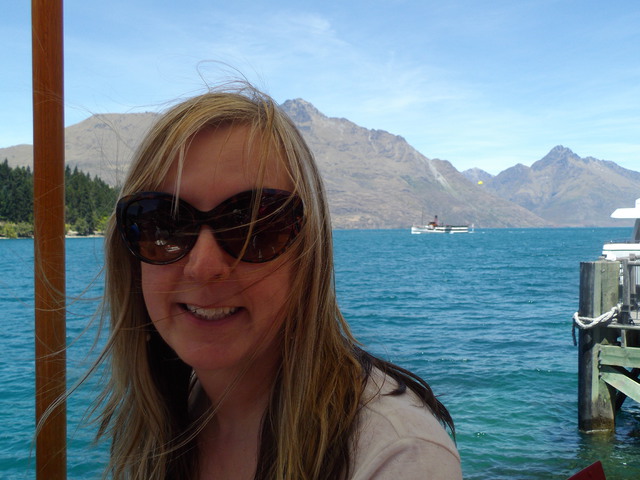 We then went shopping and for a look around Queenstowns high street, followed by a brisk walk along the beach. The beach is stony, uncomfortable, ugly and small. Yet somehow it was packed. I couldn’t help feeling everybody was there because that’s where everybody else is, not because anyone likes it! We had seen much better beaches near Dunedin that were totally empty. I think this place just has a young traveller vibe about it and it attracts more of the same. The atmosphere is good though, there is no denying that. Along our walk we stopped to feed some ducks, with the seagulls interrupting as they do. We went for a beer at one of the pubs on the main street and then went on in search of mini golf (my favourite) to see if I could finally beat Dad.

The indoor mini golf has very extravagant holes, each with it’s own special design and theme, with moving parts and impressive likeness. As such, the cost to play was $20 per person, an exorbitant amount for a round of mini golf. The game started so well for me, but on hole 8 I was robbed by some ripped carpet that eventually lost me the round. If you are going to spend all that money on salubrious holes then please keep the basics in order, the playing surface! 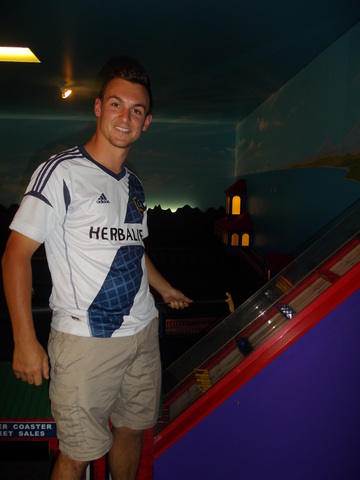 We were then forced to drive the 2 hours back to Te Anau as we had planned this day pretty poorly. We would be coming straight back past Queenstown tomorrow on our way to Franz Josef Glacier. We had a great day, and it is very, very different from the rest of New Zealand here.

One thought on “A day in Queenstown”