Okay, so I have to say straight off the bat… I don’t like Milan. I am sorry if you’re here for insider tips and to get excited for an upcoming trip, but it’s just not my cup of tea.

Let’s start at the beginning. I flew from Manchester into Milan Bergamo Airport, Bergamo is a totally different city, miles away from Milan, but it is cheaper to fly into and out of.

Off the aeroplane and on to one of 3 different bus companies that all do the same route for the same price (Bergamo Airport to Milan, €5 one way). Don’t get flustered and buy your ticket ahead of time unless you’re going during the Olympics or some other huge event. There are usually plenty of spaces and not buying ahead of time means you can get one as you board (same price) and not be tied down to one company, so can pick whichever is leaving first. They do offer €9 return, but again that pins you onto one company on your return journey so I opted for singles and it served me well.

The journey to Milan Central Station wasn’t all that bad to be honest, the buses are comfy enough and I lay down as it was virtually empty.

It was pretty dark once I alighted in the center of Milan and an Uber to my hotel was in order. If you don’t have Uber, it is an app on your phone that lets you order a taxi for a whole lot cheaper than normal taxis. I say cheaper, but Milan is still an expensive place. I burned through £125 of Ubers in a 2 night stay. Imagine the costs if had I used conventional cabs!

I was resting my head at Hotel Johnny, a cheap and not-so-cheerful place that could do with a lick of paint. The staff were as pleasant as Italians can be and the room didn’t have any cockroaches so I was happy.

I found an Irish pub (typical Brit!) and watched AC Milan get smashed 3-0 by Genoa, which made me all the more excited to watch Inter the next day at the infamous San Siro.

I started my only full day in Milan with a hearty breakfast to set me up for some serious sight seeing. How disappointed I was when the only place worth seeing was the Duomo (cathedral), and even then I spent more time in the McDonalds opposite it.

Maybe it was the people surrounding me, but I had an immediate disdain towards Milan and was never going to fully enjoy myself. I’m not a fan of shopping or fashion, so I suppose I was never going to “fit in”. Maybe it’s beautiful and I didn’t give it a chance. I can only say how I felt.

It started to spit during the afternoon and I laughed more in 5 minutes people watching than I had cumulatively over the past day. Men, women and children began scurrying around hopelessly, nipping into each doorway as if avoiding a few drops will make a huge difference. I was amazed by the amount of men that not only carried umbrellas, but put them up as soon as one fine drop of rain touched the pavement. It really wasn’t enough rain to fill a teacup, and for the first time in a while, rain made my day better.

After spending an hour watching Premier League highlights with Italian commentators, it was time to get myself ready for the big game. Inter Milan (Internazionale) v Torino at the legendary San Siro.

I decided to walk to the ground for several reasons. 1) It was less than half an hour 2) It gives me a chance to see a part of Milan I hadn’t seen 3) I knew the Uber bill was racking up and 4) I got chance to soak up the atmosphere.

With more and more fans the closer I got to the stadium, I was pumped by the time I arrived! Which, it turned out, was over an hour early because I hadn’t read the ticket properly in my excitement. Better than over an hour late I guess.

I was half tempted to buy a replica shirt from the vans dotted along the streets leading up to the ground, but travelling light means you have to be brutal with purchases.

After some food inside the stadium (which is terrible compared to the lovely grub in Italy, but better than in English football grounds), it eventually filled up and the announcer did his usual trick of displaying each of the Inter players on the large display and announcing their first name and letting the willing crowd do the rest. The biggest cheer came for the last name and top goal scorer, “Mauro……” “ICARDI!”

Very pantomime-esque but it is good to see everyone getting involved from families to hooligans. The game was exciting and finished dramatically with that man Icardi scoring both the goals in a 2-1 win for Inter, the second being 2 minutes prior to the end of time. 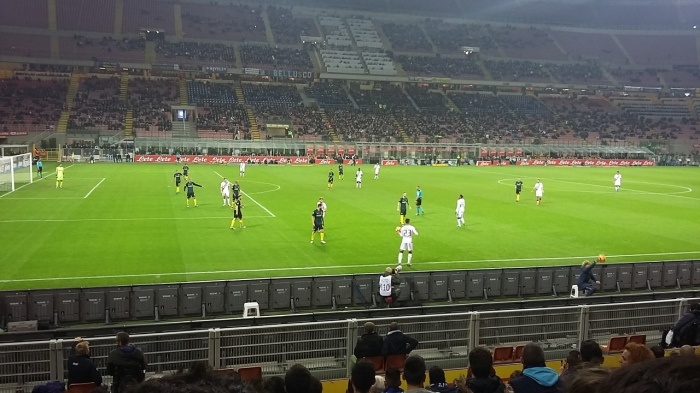 The San Siro is magnificent and the atmosphere there is one I will never forget. For me, it saved my short time in Milan.

I know there is more to Milan, I’m sure some folks will love it, but it just doesn’t tickle my pickle. If you are going, make sure to pre book your ticket to see the Last Supper painting if you wish to do so as they do sell out fast. I’m not an art man (stick it in with fashion and shopping) and I’m happy with seeing it on Google Images. Other picture search engines are available.

Sorry if I seem negative, but the next post is about my next few days in Italy when I went to Lake Como and the mood lifted significantly, so stay tuned!